Heather had never done a multi night passage and in preparation for up coming longer trips, was keen to give it a go. So we planned a 400NM, 3 night leg from Coffs Harbour to the Great Sandy Straits behind Fraser Island. This meant either going north around Fraser Island and Breaksea Spit,  into Hervey Bay or crossing Wide Bay Bar behind Rainbow Beach and traversing the straits to Hervey Bay.  Crossing the bar needs the right conditions and we were expecting a fairly boisterous sail in SE 20-25 knot trade winds, so anticipated going around Fraser Island in our passage plan.

Leaving Coffs was a decision in its own right. There was a big southerly due on Sunday night/Monday and the decision was to leave before the high wind and tolerate light winds with lovely flat seas or wait until it arrived and ride the wind and waves north. The wind is never a problem, but the waves can be an issue and 2.5-3.5m waves were forecast. As it turned out we weren’t ready to leave first thing Monday and ended up setting off about 2pm in the afternoon. The initial front had passed through, but wasn’t as strong as forecast and we left Coffs in near perfect conditions to head north.

When we bought Vega, she came with a Monitor Wind Steering System, which we have never used – until now. We decided to install her and give her a go. Our electric autopilot has proven itself again and again, but being an Autohelm of 1992 vintage it is pretty power hungry and in decent waves will draw up to 8 Amps. On a night passage this can seriously deplete the battery banks. Add in short days and intermittent sunshine and you can find yourself low on juice. Enter the Monitor. It is an incredible bit of kit, that steers the boat via the wind. I won’t go into its details now, but will post separately on this ingenious system!

Our first night was wonderful sailing. A nice swell, and 20 knots to push us on our way. At some point in the evening our wind steering broke, so we reverted back to auto pilot and sailed on. By morning we were flying, 6.8-7.5 knots as the wind had backed to the west and we were on the mythical 20 knot beam reach. Steve and Helen, on S/V John Barleycorn, had set off at midnight on Sunday and broke the trip in Byron Bay and we decided to head in there to repair the wind steering. 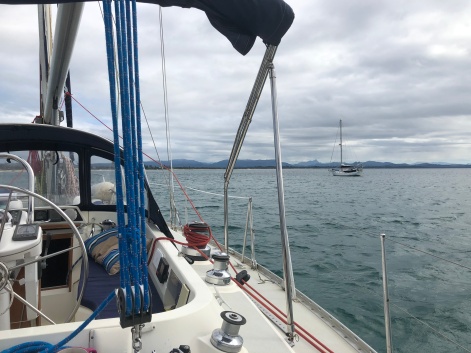 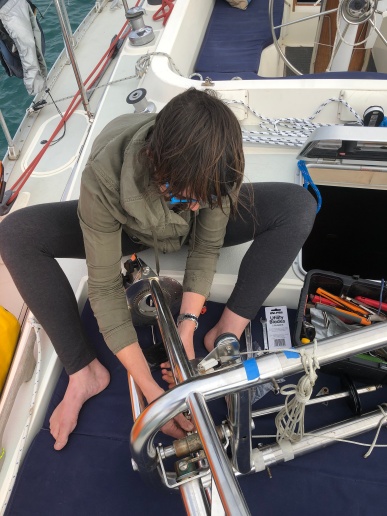 On the NSW Coast, you have a range of anchorage options. Harbours/Marinas (not many), bar crossings to rivers (need the right conditions) and open roadstead anchorages which are generally very exposed to waves and swell. Steve and Helen reported that despite the 2m swell, the Byron anchorage was flat calm. So we rounded Cape Byron, dodged Julian Rocks and dropped anchor alongside them so we could repair our wind steering.  Byron really is a superb anchorage, and even in a good southerly swell it was delightfully calm. Getting ashore to explore the town is easy as is access to the famous lighthouse walk, but we opted to sail on instead.

After fixing up the wind steering we waved good bye to Steve and Helen, turned Vega’s bow north once more, hoisted our sails and caught the trade winds. By now the wind had eased to 15 knots, but we still made good progress as first Tweed Heads and then the Gold Coast slipped by to Port.  Somewhere about Morton Island the wind dropped and we were almost run down by a trawler with no AIS. It was a serious near miss and the closest we have ever been to being hit. At least we keep a good look out, even if others don’t….

By the the morning of day 2 the wind had dropped to nothing and we were motoring. The seas slowly subsided and apart from the sound of the diesel it was a quiet day. At one point a poor little tern, took a fancy for the lure we were towing and got caught up in it. We carefully hauled him on board. Looking a sorry state, his left wing was twisted and the lure was jagged through his nostril. I’m great at dealing with fish, but not great with birds, so Heather dealt with the poor thing while I watched on. It was quite an ordeal but she managed to free him and untangle his wing, after which he padded about the back deck for a while before taking flight. He looked shaky and we hope he was ok.

As the sun dropped, we had to decide whether to press on the 145NM around Fraser Island in no wind, anchor at Rainbow Beach for the night and await the forecast wind on Thursday or cross Wide Bay Bar, before the next high tide at 10pm. We had never crossed a bar before and doing one at night didn’t feel right, but we tossed it about a bit, and decided to give it a go. The swell was low, the moon was rising to give us light, we would cross approaching high tide and once inside we would be in lovely smooth water. Through Heather’s parent’s, we had also been in touch with Tin Can Bay VMR and had received the most recent coordinates for transiting the bar along with many warnings about how important it is critical to follow them accurately.

Even with the low swell we still surfed over the bar at 8 knots, our eyes were glued to the GPS so we could follow the transit lines. Once across the initial bar, you have to turn parallel to the wave set and endure the “mad mile” which is a confused and turbulent body of water behind the surf before you are spat out into the tranquil waters of Pelican Bay, behind Inskip point. Even in the bar’s, subdued state the mad mile was lumpy and bumpy. It must be awful in rough conditions. We followed the blue lead lights to Inskip point, and anchored in the peaceful, flat calm pelican bay to the sound of dolphins breathing in the moonlight. First bar crossing. Tick. First bar crossing at night. Tick.

We are feeling pretty pleased with ourselves.