As always on a 6 week trip we had a timeframe to try and stick to, and on a boat this is always a bad thing! It would have been wonderful to have hopped up the coast stopping at every port, but that’s not what this trip is about. It’s about having a look at the southern part of the barrier reef.

Next stop was Coffs Harbour. Heathers parents, Peter and Ruth,  live in nearby Bellingen so we had decided to pop in and say hi, and leave the kids with them for a week while Heather and I sailed next leg alone –  400NM to Bundaberg.

Coffs Harbour is 140NM north of the Broughton Islands, at 5 knots 28 hours or at 6 knots 24 hours. The northerly wind was easing and predicted to back into the west, before turning south west. So at 3pm we motored out of Broughton Island, dodging humpback whales as we went.

At first the breeze was too gentle to sail with, but by 8pm it had strengthened and we once again had the main, on a preventer, out the starboard side and the head sail poled out to port. The wind built to about 20 knots, gusting 25kts and the sea rose with it. It was a lumpy night and by dawn Milly felt a bit worse for wear, although she pulled up ok after a seasickness pill, another sleep and a hot chocolate!

We were visited by a huge pod of dolphins mid morning, and they played all around Vega for over an hour, jumping, diving and having heaps of fun while her crew sat on the foredeck enjoying the show. We have seen lots of dolphins, but they never cease to captivate us with their playful, inquisitive nature.

Once the dolphins had gone, we returned to the cockpit and noticed we had fish on both our lures!! Where there are dolphins there are fish! We quickly started pulling them in, but Milly’s managed to jump the line and escape, while Ben and I landed the other tuna.  It was only small, maybe 3 kg, but Heather did a great job filleting it into 4 beautiful pieces of fish.

After the Dolphins had gone and the fish caught, Milly, in one of her more reflective moments, said she couldn’t decide if she would rather be reincarnated as a dolphin or a sea eagle!  Intrigued, I asked her why…Sea eagles, she said, are lucky they can fly high in the sky, but they seem lonely. Dolphins get to surf the waves and are always together, in a big group with lots of company.  It was a lovely insight to a growing, developing mind. Me, well I’ll come back as the sea eagle every time. No brainer.

By lunch the wind was easing and we fired up the motor and motor sailed the remainder of the way to Coffs, dropping the sails just before dusk and putting into Coffs Harbour marina and tying up in the dark. 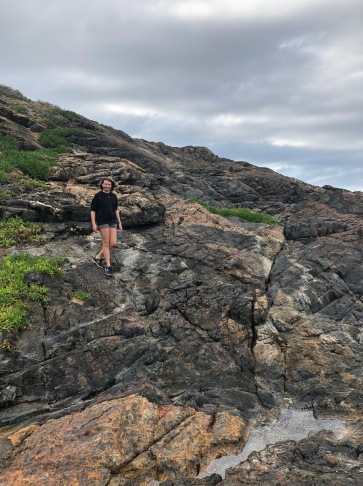 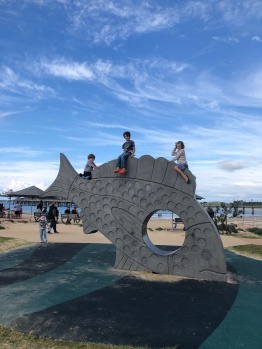 At Coffs harbour there is an outer breakwater and an inner breakwater, The Outer breakwater provides a level of protection to a large area you can anchor in. Swell creeps in and it can be a bit uncomfortable, but it is safe in all but the worst conditions. There are also a couple of courtesy moorings available, but these are pretty popular and you need to be lucky to snag one.

Inside the inner breakwater is the marina. It cost us $60 per night including water, power and access to all facilities. It is a friendly place to hang out and we bumped into a number of cruising yachts here, some of which were heading north like us and a couple who were off to New Caledonia. There was even another yacht with kids on – always a rarity, and Ben had great fun playing with Luke and Isabella from S/V Eclipse. We also caught up with Steve and Helen on S/V John Barlycorn, with whom we had had a couple of beers at Broughton Island. It’s a bit of a yachting crossroads!

The only difficulty we had at Coffs, was getting fuel. It’s a very active fishing port and the fuel wharf was busy non stop so we had to use jerry cans and the local garage to get fuel!