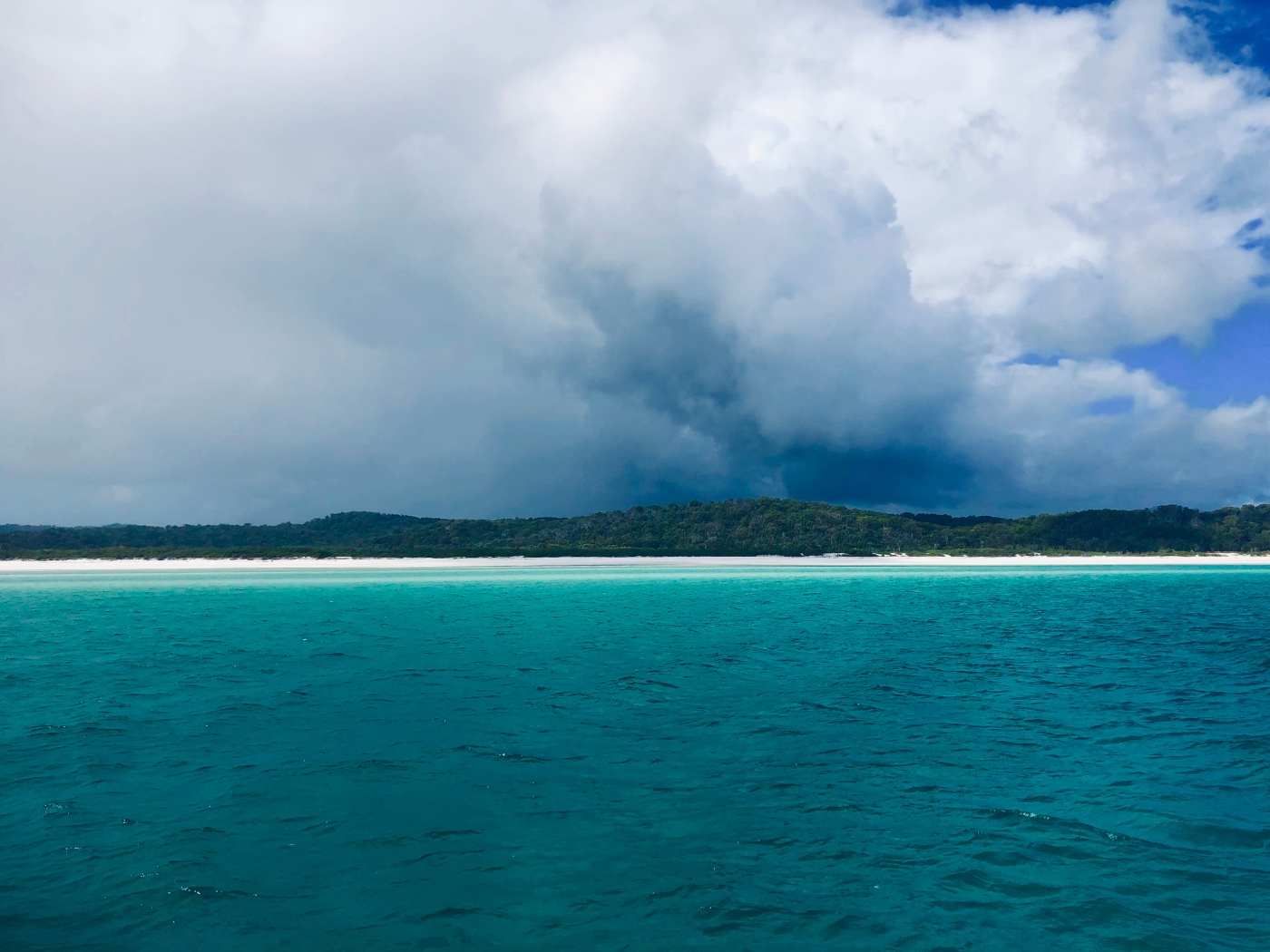 The Great Sandy Straits are an epic body of water separating the world heritage site of Fraser island with the Queensland coast. The area is a complex landscape of mangroves, sandbanks, mud islands, salt marshes and ecologically important seagrass beds. The whole area is packed full of wildlife including prolific birdlife, fish galore, sharks, crocs, whales and of course dingos, so there is plenty to look out for!! 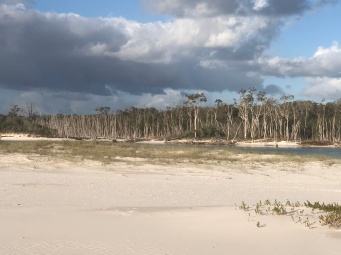 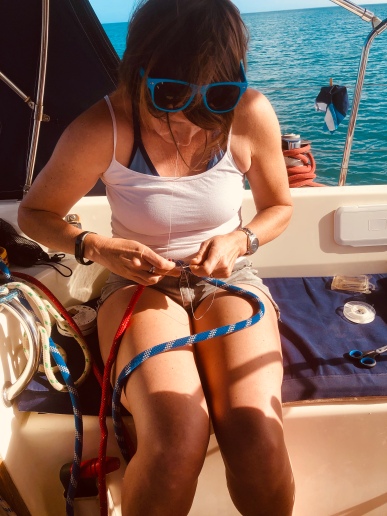 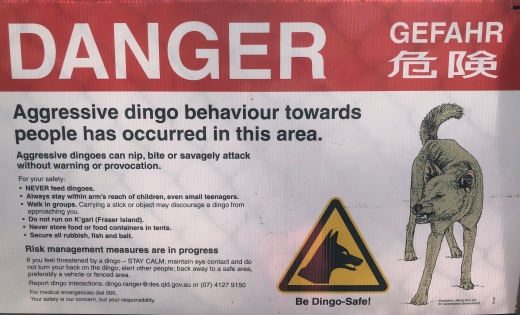 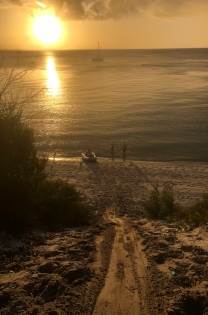 It’s very different to anywhere we have cruised before and proved to be both challenging and fun, even though our weather was less than ideal and spent much of our time dodging  nasty weather systems, rainfall and storms. In the winter, the prevailing weather is from the south and Fraser Island forms a natural barrier protecting the sandy straits. In fact the whole west side of Fraser Island forms a good place to be in a southerly blow and you can still move your boat about and explore in the lee of Fraser Island even in 20-30 knots. Although, with the strong tidal currents, if you get your planning wrong you can soon end up with a rather ugly wind over tide situation creating a steep, short chop which can be a bit miserable to punch into as we found when we left it a bit late leaving the east side of Big Woody Island one windy afternoon!

Fraser Island or K’gari is the largest sand island in the world and is a major 4WD destination. It also has a host of walking tracks including the Fraser Island Great Walk, a 90km 6-8 day classic. We opted for some shorter options and there are a range of tracks around the Kingfisher Resort which make great family friendly bush walks through a variety of different terrain, but don’t forget a decent stick to fend off any over friendly dingos! We bumped into a couple who had been camping there with their 4 and 6 year olds and the dingos had aggressively approached their kids on multiple occasions, requiring them to seek the shelter of their 4WD…not a great experience.

We navigated through and around the whole of the straits and then explored Platypus Bay, which is a 50NM stretch of Fraser Islands coast  that makes up the outer side of Hervey Bay. The whole bay is a sailors paradise, providing enough protection to anchor close to the beach (all 40NM of it)  even in strong SE trade winds and if you venture a couple of miles off the coast you are rewarded with perfect beam reach sailing in flat waters. Paradise. When we were exploring Platypus bay the trade winds were blowing at 30 knots and we had some boisterous day sails followed by tranquil nights at anchor. Our days were spent sand boarding on the dunes, watching the eagles soar above and checking out the marine life. The days were warm and the nights crisp and it felt remote, wild and untouched.

One evening just before sunset, we were sipping a beer as an adult and juvenile hump back whale swam past Vega between our bow and the beach – we all stood on the foredeck, awe inspired as these huge whales cruised alongside us making an unforgettable experience. These were two early season whales – the humpbacks  enter Hervey Bay on their way back south and the best time to see them is between late July and October when they arrive in droves to rest in the clear, tranquil waters. 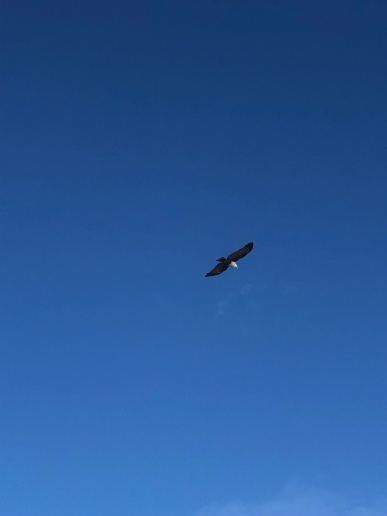 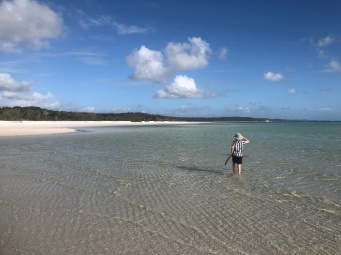 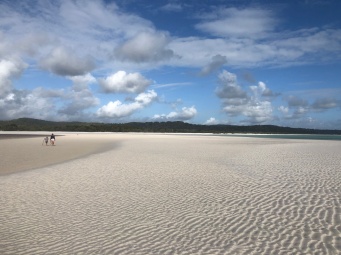 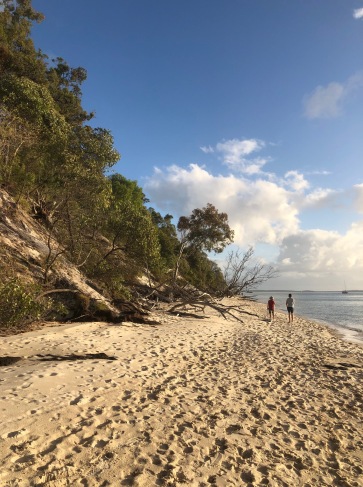 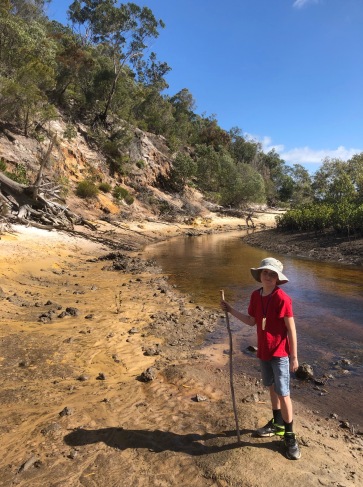 One thought on “The Great Sandy Straits”