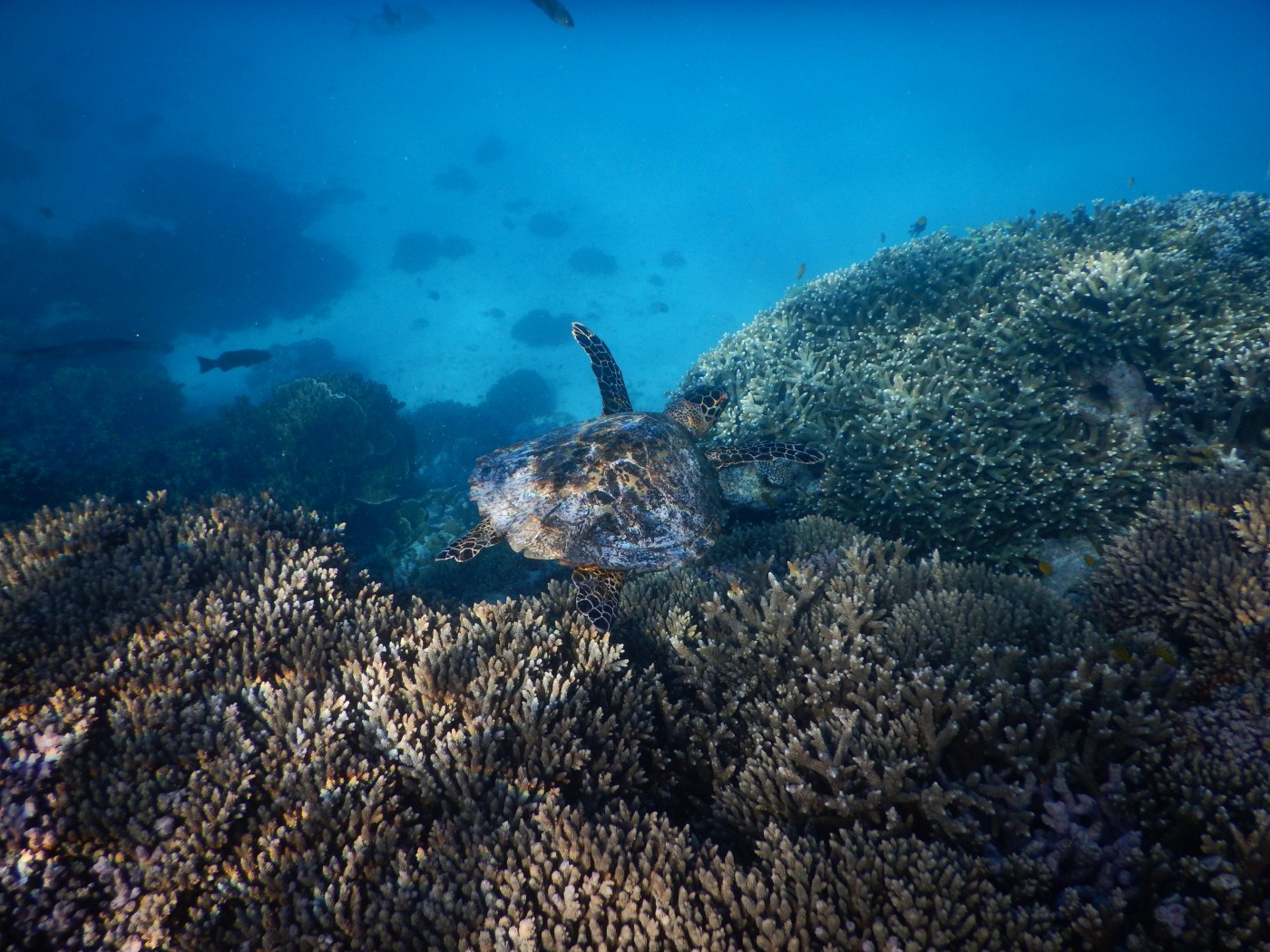 We were stuck in Bundaberg for a week as the trade winds hammered the coast of south east Queensland. Bundaberg isn’t a bad place to pass a few days – we looked around the Hinkler Museum, the Botanic Gardens and visited local markets etc as well as antifouling and polishing Vega.  The Hinkler museum is well worth a visit if you have kids, its highly immersive, interactive story of one of Australia’s great aviators – Bert Hinkler. We spent a good couple of hours exploring the displays, old aircraft and various flight simulators.

After a week of the wind blowing at 30-40 knots the waves offshore were forecast to be around 5m, which is healthy by any standards. But by Saturday the wind had eased and by Tuesday conditions were forecast to be perfect. We were itching to get out to the reef and decided to head off at midnight on Sunday, so we arrived at the reef late morning.

The wind had eased but was still around 18-22 knots and was just aft of the starboard beam, but the swell was a bit bigger than we bargained for! As we left the calm of the Burnett river Vega rolled, yawed and pitched through the foaming white caps of Hervey Bay. Half asleep and in the dark, Heather and I slowly got Vega under control, hoisted the main sail and set course for Lady Musgrave. As we got further from the coast the swell got bigger and bigger.Fortunately it was dark, so we couldn’t see the waves. But you could hear them breaking all around us and just make out the white caps fizzing by under the night sky.

It was all a bit much for Heather who trooped through her night watch vomiting into a pan. The sail was really fast and we were thundering along at between 7 and 9 knots. Occasionally Vega fell off a big wave and you instincively grabbed for a handhold to steady yourself just as you felt your stomach drop. You held your breath waiting for the bang, but it never comes. The next wave picks up Vega and helps her on her way.

I reefed the head sail to slow Vega down as we didn’t want to arrive at the reef in the dark. By dawn you could see the size of the waves. Most were 2-3 m but occasionally a set of 4-5m waves rolled under Vega. They looked daunting under the grey stormy sky. As we were approaching Musgrave we were hit by 3 large squalls which were seriously wet and windy.

As we rounded the north west side of the reef the swell abated a bit but it was still rolly as we headed towards the markers identyfying the channel leading through the reef wall and into the lagoon. 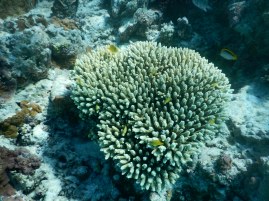 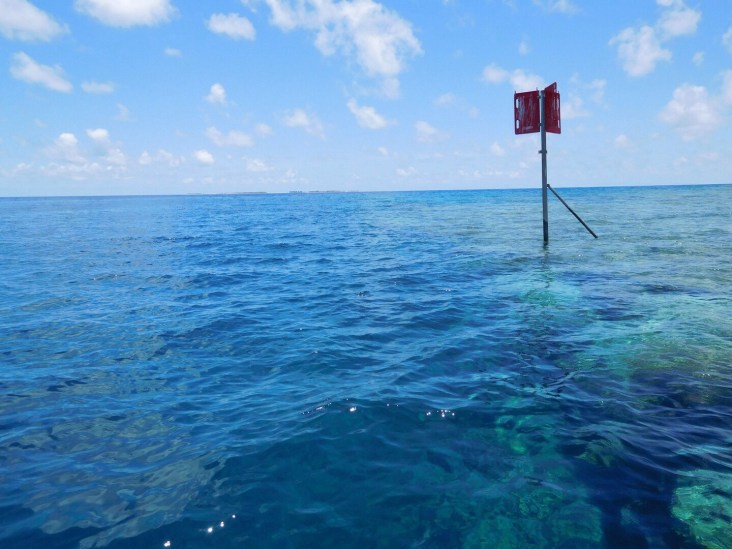 The channel into the reef is narrow, and the coral is easily visible on either side as you slowly motor into the lagoon, its a nerve wracking experience the first time you do it! As the tide goes in/out there is a large volume of water that passes through the channel so the currents can be strong and its best to enter on a rising tide and leave on a falling tide so you are not fighting the current.

The minute you are inside the lagoon the swell disappears and the water turns a wonderful deep blue. It’s a magical feeling as you stare down into crystal clear water looking out for coral bommies as you navigate your way through the lagoon.

As the weather had been bad there were no other yachts in the lagoon so we picked up one of the Great Barrier Reef National Park mooring bouys and got breakfast on while Ben got his rod out. It was only a matter of minutes until he called “fish on” it was a good size Remora, which look just like baby sharks,  so he was happy. Even more so as the fish didn’t stop biting all day! It was still blowing 15-20 knots but the lagoon, while choppy from the wind, it wasn’t uncomfortable and you could easily anchor here in quite a blow and be safe as long as your anchor was well dug in.

It was a bit too rough to snorkel so we headed across to the island for a walk, the highlight of which was finding four black tip reef sharks swimming around in a shallow lagoon. That afternoon was more fishing and we had lots of fun with 3 giant squid. They were about 50cm long and every time we caught a small reef fish they would dart in and try to take to take the hooked fish, ending up with their tentacles wrapped around the fish while they furiously pumped water to try and drag it down to the inky depths… 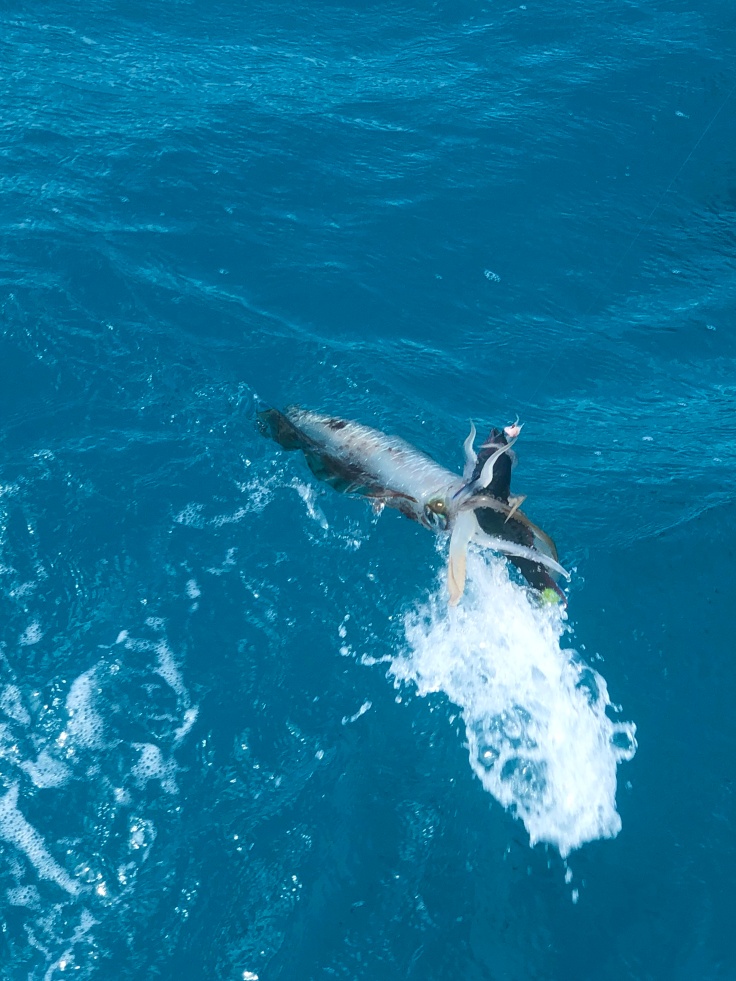 Day 2 dawned flat calm and sunny and it was a day of snorkelling and diving. We explored the coral gardens and an area called the aquarium before moving on to different coral bommies dotted around the entrance to the lagoon. The coral was wonderful, lots of different types including stag horn, elk horn, finger, plate, brain and a whole host of others.

We saw turtles on every snorkel, some times 2 or 3 at a time, schools of reef fish, solitary big wrasse cruising in the shadows, octopus, squid and a huge bull ray. It was extraordinary and even Heather, who isn’t a fan of getting in cold water 😉  loved the experience.

After a full day of snorkelling and diving we were all exhausted.  We sipped our sundowners, in silence,  soaking up our surroundings. As the sun slowly set, i felt lucky, privileged and humbled to have been able to visit somewhere so beautiful, on our own boat. 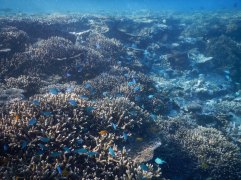 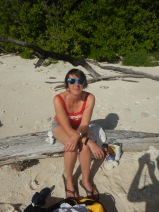 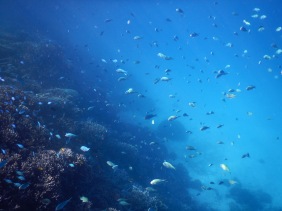 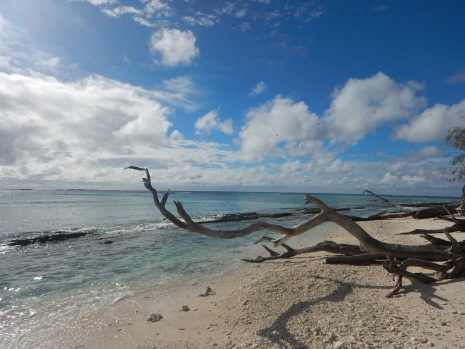 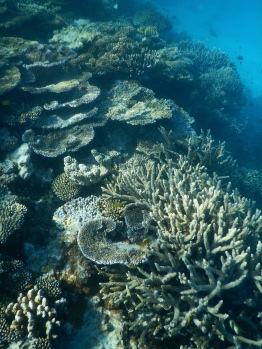