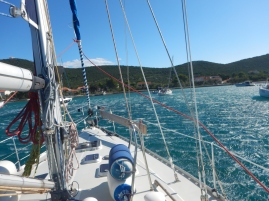 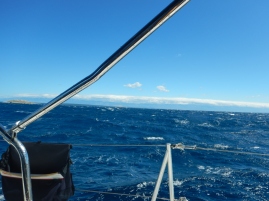 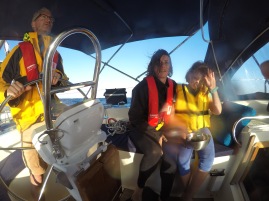 The Bora is a northerly wind that blows from the mountain’s running parallel to Croatia’s coast. It spills out over the coastline and into the Adriatic from a northeasterly direction and with incredible force. We’ve been through a few Boras already, but this one was a doosy.

Unlike the Meltemi in Greece, or the Tramontana in Spain, which are strong and constant winds, the Bora is gusty. Really gusty, but fortunately they are quite well forecast. Late in the afternoon, we hooked on to a mooring buoy in a beautiful bay on the southwest side of Silba, an idyllic island in the North Adriatic. The sun was shining and we enjoyed a lovely evening walk to the hamlet of Luka for a few drinks before returning to Vega.

Life was good. But it was about to change!

After an early evening swim and dinner we all went to bed. At 2 in the morning all hell broke loose. Within an instant the wind across the deck was over 50 knots in the gusts and the noise that came with it incredible, the only thing I can liken it to is a jet engine spooling up.

The water around us was whipped into a spume laden frenzy and Vega swung through an arc of 180 degrees and listed over 20 degrees as the lines holding us to the mooring buoy struggled to do their job.  The rain was intense, over 75mm in 4 hours and the thunder and lightning, again, too close for comfort. It was so windy I had to crawl to the bow in the torrential rain to check our lines, walking was out of the question and the shore only 30m away was totally obscured by the rain. The weather was atrocious, but thankfully short-lived, and by dawn things were improving.

In the morning the wind was 20-25 knots and after careful consideration we decided to head off south. As we left the bay we un-furled a little headsail, we were sailing at 6.5 knots in no time, all was well. There was another island off Silba and I had intended to sail down wind and then head south leaving it to port to avoid the worst of the seas. But I didn’t… and that was my first mistake of the day. The fetch from the next island of Pag was only 12 miles, but given the strength of wind overnight the waves had built up. As we left the lee of Silba the waves were steep with foaming white crests. To follow our course they would have been beam-on so I adjusted course to bring them just forward of the beam, they weren’t breaking, but each time a wave hit us Vega rolled over a bit and it was more comfortable with them just infront of the beam. It was a wet and windy sail, but once we all settled down it was fantastic fun sailing at 7-8 knots with the waves rushing beneath us. As we fell into the lee of Ist we relaxed as the waves reduced and the wind moderated. However, we had misjudged the wind acceleration zones between the islands, mistake No.2 of the day.

As we approached the first break between islands wind backed sharply and gusted incredibly. With a third of our head sail set Vega heeled right over…. then over a bit more. The wind was strong, and gusting in the low 40’s and was right on the nose as it wrapped itself around the headlands. Vega was a little over powered, but looked after us, no rounding to wind, no broaching…she just dug her shoulder in and kept going. All around us were small islands and rocks, navigation was tricky and Heather had been spooked by the gusts, so we headed into Ist to compose ourselves.

It was a short, but demanding sail and it highlighted to me how very different things can become when you are a small crew stretching your abilities. We are not a well-crewed race boat with a person dedicated to every function. There are two of us. So dealing with navigating, reefing, managing the boat, making sure the kids are ok in conditions we are not used to was tough going, but this is how you grow and how you learn. It doesn’t bear thinking how Heather would have got the boat back to me had I gone over board, or me to her in those conditions. I guess we really should have practised heaving to, man-over-board recovery, setting our try sail etc in these stormy conditions. But we were at capacity just sailing the boat.