Crossing the Atlantic from east to west between November and March (outside hurricane season) is often referred to as the milk run. If you believe the old salts this run consists of picture perfect downwind sailing. You leave the Canary Islands, head south till the butter melts then throw in some west until you arrive at the Leeward Islands in the Caribbean to drink your fill of rum punch.

We left the Grand Canaria in the Canary Islands on the 20th of November. As I write it’s the 25th and we have yet to see sunshine or trade winds and are currently beating into a south westerly about 200NM north west of the Cape Verde Islands. Go figure. It’s been wet, stormy, windy and not without the occasional decent swell. At the pre departure weather briefing, Chris Tibbs did say its not all plain sailing, but we have been surprised with just how drab the weather has been, thanks primarily to a stationary trough sitting over the southern part of the North Atlantic.

In addition to the trough, the Azores high (which dictates the trade winds) has drifted north, leaving a huge wind hole on the great circle course between the Canaries and St Lucia, so we will now be becalmed for 3-4 days and our 14 day crossing looks more like 19 days so food and rations will be running low.

Not great sailing and all very frustrating. But that’s the lot of an ocean sailor. You need patience by the bucket load. You can’t change the weather and need to manage your emotions, stay calm and focused on keeping the boat moving at the best average speed you can. Increasing you boat speed by just a 1 knot average, shaves 2 days off an Atlantic crossing…it’s a numbers game. 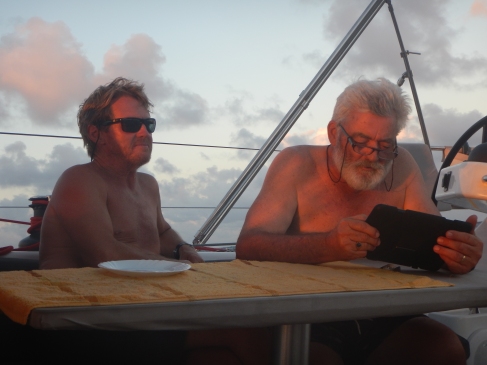 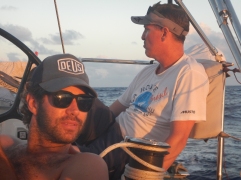 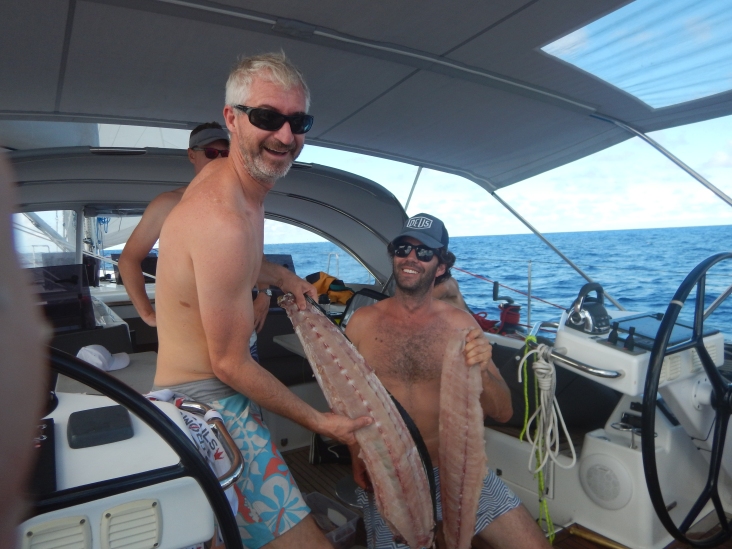 Well by now, we had hoped to have covered 1400NM and be halfway through our adventure. Sadly we are not. We have barely covered 900NM and still have 1800NM to go. After days of wet, gloomy conditions with variable wind the forecast just gets worse. To add to the lack of wind, the forecast now predicts gale force squalls to the west of the Cape Verdes where we currently are and a series of weak low pressure systems are heading our way to compound the trough we are already in. Our average speed to date has been 6.9 knots. If, and it’s a big if, we manage to maintain this average it will be another 12 days till we are anchored in St Lucia, giving us a total trip time of 18 days. If this average drops then it could easily spin out to 20 or 21 days and the crew will miss their flights home. All this is a bit depressing, and the incessant rain is making life aboard tougher than normal and does not help spirits.

We are currently motoring across the Atlantic in the hope of making up some ground. We carry 550L of fuel and can motor for 100 hours at 2500RPM. To eke out our fuel supply as far as possible, we are motor sailing balancing the RPM with the light breeze to maximize our apparent wind and our course over ground (COG). It’s a constant balancing act. 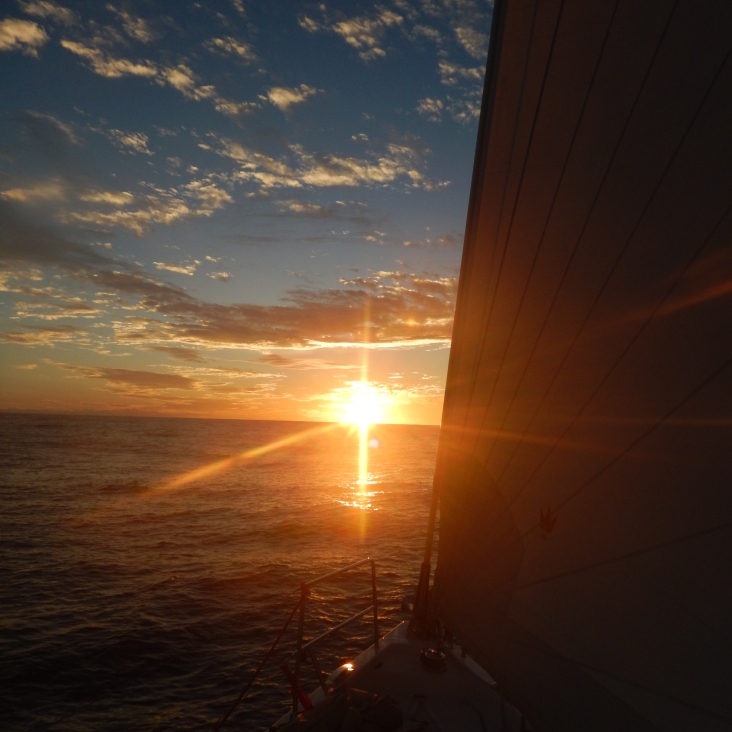 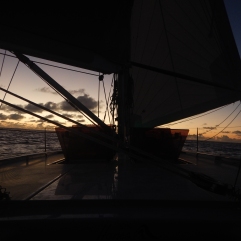 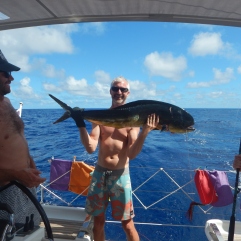 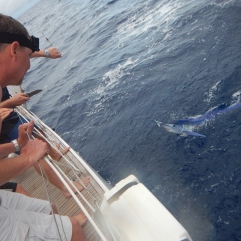 Last night we hit the 1000NM at sea milestone. Earlier in the day we snagged ourselves a 9kg blue fin tuna. We had caught him on our hand line and had somehow missed him taking the lure. When I eventually saw him in the water Ian quickly pulled him in to reveal a lovely, but tired tuna. After the fun of reeling her in there was a lack of volunteers to kill the fish. Having done the deed a few times I dispatched her as humanely as I could, before cleaning and slicing her into steaks.

I’m always amazed just how beautiful these fish are and genuinely grateful for every one I have been lucky enough to catch. Their skin shimmers a deep blue and I always feel saddened as the fish flail before drawing their last breath and giving up their life for us.

The boys on board Fourth Dimension dubbed me the “fish whisperer”. Unbeknown to me while I was killing the tuna I found myself talking to it and stroking the beautiful fish. I had no recollection of this, but go-pro footage doesn’t lie. Death is sad and should be respected, particularly if you are the one taking the life.

Only catch what you can eat and respect the ocean, it’s a wonderful but formidable environment. I hope if I ever get caught on its bad side it shows me some compassion or at least gives me a stroke and some comforting words before taking me. ….

Having enjoyed our tuna and 2 beers each it was back to our watch system and on into the night. As dawn on our 9th day came the sun was shining and the rain gone. We even got a bit of wind. 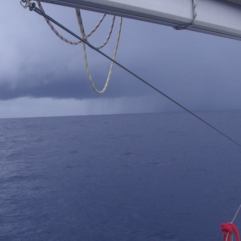 But today is a major milestone. We have covered 1485NM which puts us pretty much half way across the Atlantic Ocean. Sadly the much promised trade winds still elude us, although occasionally the wind swings nor’ east and increases….teasing us for 30 minutes or so before disappearing. According to the ARC forecast prepared by UK meteorologist Chris Tibbs and our GRIB files we download via satellite phone we should start to get our first north easterly trade winds on Thursday 1st December. Well after time.

Our halfway celebration was marred by the failure of the Code Zero and Asymmetrical Spinnaker mast head block. The first we knew of this was when we doused the code zero to find the halyard almost chafed through. Clearly something was amiss. Simon went up to take a look and discovered that the entire mast head block had torn off and was nowhere to be seen, the two retaining bolts still in place in the mast. This reduces our sail plan to head sail and mainsail – which will reduce our chance of making up time if we ever enter the trades.

Our half way beers were a subdued affair.

On reflection, we believe the failure of the block was operator error. The Hanse 575 has very powerful electric winches and overzealous halyard tensioning could have attributed to the failure mechanism of the mast head block. We will take a better look in St Lucia. In the Atlantic swell Simon was being knocked about like a rag doll 80 ft up in the air and didn’t investigate too closely. Fair enough.

Our 12th night at sea was an interesting one. After a good day sailing, the sun dropped and the 7-10pm watch took control of the boat. The wind was a nice 12-17 knots. By 9pm all hands were on deck taking a few turns out of the head sails and putting a first reef into the main. The wind was 25-27 knots and the rain torrential. This was the first of a series of nasty line squalls that hit us that night. The biggest and most intense came through at about 2 in the morning with driving rain and 37 knots of breeze: Time for reef 2 in the main sail.

During the day you can see the squalls developing and easily track their path. At night though it’s much harder. The moon is currently waxing and the nights are long and dark. You can’t see anything. We use the radar every 30 minutes or so to look for large rain systems, but we don’t run it all the time as it is very power hungry.

In line with our most recent forecasts, the trade winds have appeared on the first day of December. Nor’ Easterly at 12-18 knots puts them right on our starboard quarter and we are finally sailing due west towards St Lucia and the Windward islands. The Sun is Shining. Jimmy Buffet is playing and the wind is filling our sails. Life is good.

This is what the last 11 days should have been like! We are hoping to reach landfall on the 7th/8th December and I think we are all looking forward to the Caribbean rum punches.

The weather seems to have stabilised and we are generally now in the trade wind belt. We have days of 15 knots and super sailing with the head sail poled to starboard and the main out to port, and days of frustratingly light conditions. But we are homeward bound, and catching plenty of fish. Our biggest yet has been a Mahi Mahi estimated at 15Kg! She tasted superb, there is nothing quite like really fresh fish. Almost every day our lures get taken and at least 3 times now we have had seriously big fish on, which we have battled with before ultimately loosing. Having crossed the Pacific from Sydney to New Caledonia and now crossed the Atlantic…there appears to be a lot more marine life in the Atlantic than the Western Pacific…

Last night we were hit by a whole series of squalls and at one point the engine was turned on and we managed to get the fishing lines wrapped around our prop. Never put your lines out at night!

After 18 Days at sea we have spotted St Lucia through the cloud about 30NM off our port bow and will be in the Caribbean in a few short hours. Quite a trip. We have talked it over on board and have come to the conclusion, that unless you’ve done it, you won’t understand it. The highs and lows. Emotional Turmoil. Stress. Euphoria. Sadness and happiness. I think you feel it all. Being 6 blokes on board, this stuff wasn’t talked about too much…but it was there and we all had our days, good and bad.

The Atlantic didn’t let us out of her grip easily and all the way to the finish line we were mauled by a series of squalls, some with gale force fronts and tropical down pours. 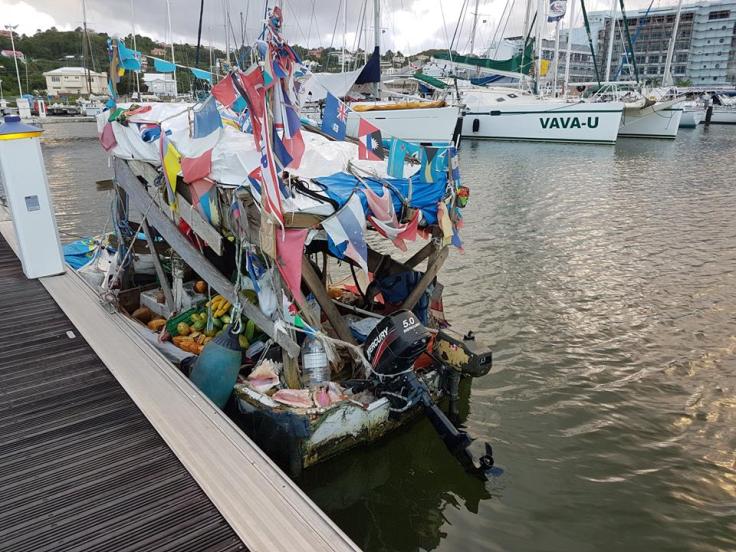 This was our arrival party into St Lucia…Welcome to the Carribean!

One thought on “The Atlantic Crossing”