In our first season we had been sailing for 7 weeks and not met another family. To be fair it was very early season and there weren’t many boats about, but our kids, and especially Ben were crying out for other kids.

One afternoon we pulled into an anchorage in Mahon, Menorca and next to us was a boat with three kids on, flying a Danish flag. Heather, Milly and Ben jumped in the dinghy and headed over to say hi.

That is how we met the crew of Calyxa.

Since that chance meeting Rasmus, Yoannia, Emma, Mille and Hannibal have been a permant part of our Mediterranean cruising trips. We sailed from the Balearics to the Aegean with them, then up Adreatic to Venice and this year from the Ionian to Sicily.

That’s a fair bit of sailing with 5 kids in tow. We have had countless highs and lows, helped each other out and pepped each other up when things have been tough.

Although very different, all the kids got on well and played non stop together. When we first met them the Calyxa kids could speak limited English, but after cruising with them for 2.5 seasons their English skills had come on leaps and bounds…Emma, the eldest is totally fluent. Sadly our kids picked up slightly less Danish…but still frequently call me numsy….Danish for bum. I’m so proud.

While Ben, Hannibal and Mille played in the sea, Emma and Milly were often spotted at the far end of a beach, or on a cliff or buried in a cabin deep in discussion about important girl’s business. They seemed to be able to talk for hours and hours…it was lovely to see.

But Sadly, we said goodbye to them in the Aegadi islands as, for a bunch of reasons, they decided to cut their season short and head home to Denmark.

After high winds, high seas, lots of laughs and lots of beers we finally waved goodbye to them a few weeks ago. It was a sad day.

Guys, thanks for the good times. You will be missed. 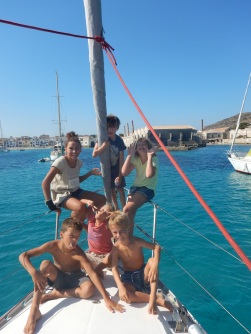